Mark Mosher is an electronic musician, and composer from Boulder, CO. He is also a seasoned performer who has played 100s of shows in bands prior to launching his own one-person show in 2009. He now performs his original sci-fi inspired electronica compositions in live concerts using expressive controllers such as keyboards, drum pads, Theremin, and AudioCubes. In 2013, Mark created a variation of this show to to visually amplify his performance using interactive visuals based on live camera input and visual synthesis.

He’s been invited to play festivals and theaters around the country such as Electro-Music Festival NY, Mountain-Skies Festival in Asheville NC, Pacific Northwest Synthfest, Art Institute of Sunnyvalle, Georgia Tech, the grand opening of the University of Denver’s Performance Black Box and more.

Mark gives back to the community by blogging on electronic music at Modulate This! At a local level, he’s the organizer of the Boulder Synthesizer Meetup and a volunteer at local STEM schools to help create electronic music labs. 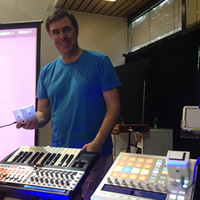