Great directors are like military generals, as it is necessary for them to win each battle or small challenge, while keeping the big picture and vision in mind, while both inspiring and directing all the "troops" working under them. Benevolent "dictatorships" that are always mutually respectful of everyone, and allow and encourage creative collaboration on everyone's part, are my favorite way to work.
And, being the "General" is not always a very socially popular position. If everyone on a set likes the director, somehow he's probably not doing his job completely or effectively. If you want everyone you work with to like you, do not be a director!

The director has to understand all parts of the process, all the jobs involved, and maintain clarity and purposeful direction, while understanding that sometimes the greatest art occurs accidentally, and not always "under control". Too much control can kill the life out of a project. And the muses or spirit, must be always be consulted and invited to participate, with great respect.

Currently doing post production on a bicycle documentary I shot this last summer and fall, AND finishing rewrites on three diverse feature screenplays, and raising capital to produce them. The first one is a story and character driven metaphysical western. All to be shot on HD DV, and RED Camera equipment.

Directing is an innate, natural, and potent talent of mine.I am an excellent and effective director, working very well with talent (it takes one to know one), as well as my tech crews. I was a Teamster and a member of the I.A.T.S. E. unions, and worked professionally at the big studios, as a set-builder and prop-maker.

I am a director, actor, writer, and acting coach, and have decades of training and experience on stage, screen, and voice-overs, in Hollywood, primarily.

I've also spent my time editing with Final Cut Pro and Avid systems, and will always defer to people more facile with editing bays and the kind of focus and patience that editing requires. I find that some of the best editors also play or gave played music and innately understand rhythm and timing.

I am a published writer, and have worked as a script reader and supervisor at 20th Century Fox Studios. I have worked at Universal Studios, Warner Brothers Studios, and MGM (back "in the day"). I have written, produced, and directed much theater (equity-waiver), in Los Angeles and the midwest as well as cable television programs, and a number of music videos. I have written, produced, directed, and edited programs for Boulder's Channel 54-CATV. While I enjoy the artistic control over recorded performance material, as a Director, I really get off on live directing/producing with 3 camera, multiple camera shoots!

My acting experience includes films by Oliver Stone, Larry Cohen and LARCO Productions, HBO Pictures, and Innersound Studios, other independent production companies, and episodic television, (mostly at Universal) and a great deal of theater, from original productions to Shakespeare, to American classics, to American musicals, to experimental and avante garde theater.
I trained with Stella Adler, and Lee Strasburg, the greats of American acting, and Hollywood based acting teachers, Eric Morris and Donna Gerrard. I produced and taught the "Way of the Actor" acting and performance classes, for perfomance artists (actors, comedians, musicians) professionals, and specific classes for non-professionals (lawyers and business people), school-age children (I taught in the Denver Unified School District), in Los Angeles, and here, in Denver-Boulder, and the midwest.

Beginning in my late teens, I began many years of studying dance, african dance, jazz dance, and other body movement, including pantomime. I believe strongly in full-bodied expression and a physical-emotional dramatic connection, most especially in character development and reality.

My performance knowledge and skills are also inspired and created by decades of esoteric, ongoing spiritual practices, and years of formalized academic and practical studies, of in-depth psychology and sociology.

I understand rhythm and timing. I have professional training, musically, in voice and violin, and have years of experience as a performing musician, from classical music to popular music, running the gamut from punk to Rock 'n Roll, as a lead vocalist, pianist/keyboardist, rhythm guitarist, composer and arranger, onstage (many rock'n roll clubs) and in recording studios. I have produced other musicians and bands in various recording and performance projects.

Effective and dramatic communication are excellent skills of mine. I have written numerous scripts (some of which I produced and directed)and screenplays, and I am very quick with storyline and character development. With a great deal of deep awareness, I know what motivates characters, what drives them, or us, and what grabs us, affects us.


Performance, directing, performance art, film, video, music, singing, feeling, acting, writing, dancing, communication and storytelling - these are what my life is, and has always been about.

These things, these forms of expression, of creativity, are me. I am them. Other aspects of life which are as important to me, are the love and loves of my life-those beings-people, animals, who have blessed me in my everyday experience all of nature and it's power and the beauty in the world around me (that constantly keeps me amazed) reminding myself and being constantly reminded, that we are all spiritual beings having a human experience (and not the other way around) and doing what I can to serve the world, other beings, and that which has created us all. These things, these lives, life itself, and artistic expression, and service (seva in Hindi) are vitally important, to me, deeply and personally. Period. 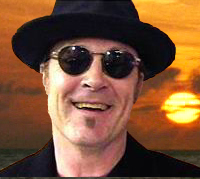 RAE BAGOT -the Way of the Actor
Discipline: Film/Video
Category: Talent (On Screen/Voice)